Any Questions? Request a callback from our Tax Experts.

What is Maa Bhoomi?

Today technology has reached everywhere and there is hardly any sphere of life which is untouched by it. India being one of the fastest developing country is getting digitalized day by day and recent internet growth in India is unlike anything in the history of commercial internet and even as the rate at which people are coming online is not very fast, India is working towards making internet more affordable for its people to scale continuous growth. Both the state and central government are working on digitization of their departments in order to provide most of the services online to the general mass and Telengana State Government has walked one step further in the direction of digitization of its departments by taking an initiative by the name of Maa Bhoomi.

The Government of Telangana is working round the clock for the benefit of its people and very oftenly comes up with schemes to make life of the Telengana people easier and comfortable by arranging the facilities and making them accessible as well and since majority of Telengana population belongs to the agricultural background, Telengana State Government has come up with Maa Bhoomi to make life easy for the farmers and making their job easy if they want to know about their land without visiting MeeSeva centre. Telengana State Government in association with NIC Hyderabad has developed Maa bhoomi i.e. an online land record website for the state and it was launced in February 2016.

The prime reason behind the launch of Maa Bhoomi website was that maintenance and upkeep of physical documents in files and folders need proper maintenance, storage and manual labour. Also it is difficult and at times impossible to find data stored in the physical files and folders and Telengana being a big state was facing problem in storing its land records and to give information to people about their land was another uphill task Telengana State Government was not willing to do and thus it came up with the solution of digitising all land records and thus the idea of Maa Bhoomi was conceptualised and implemented and to add one more feather to its cap Telengana State Government has also launched the app version of Maa Bhoomi which is available for all android users and thus they can access and Maa Bhoomi, as appears from its name means our land and was launched with the objective of helping landowners and cultivators to go through the government records of their own land online rather than approaching the concerned office everytime for getting information. Telengana State Government launched Maa Bhoomi website and it was launched by then Chief Minister Sri. K.Chandrasekhar Rao. Land records of 10 Telengana States i.e. Rangareddy, Medak, Hyderabad, Mahaboobnagar, Nalgonda, Nizamabad, Karimnagar, Warangal and Khammam are available on Maa Bhoomi website and same can be accessed by the common people. Also details like extent of land, survey number, owner name/Pattadar name, tax, nature of the land and crop and other relevant details related to land is available and can be accessed by its people.

Contents available on the Maa Bhoomi website are as below: 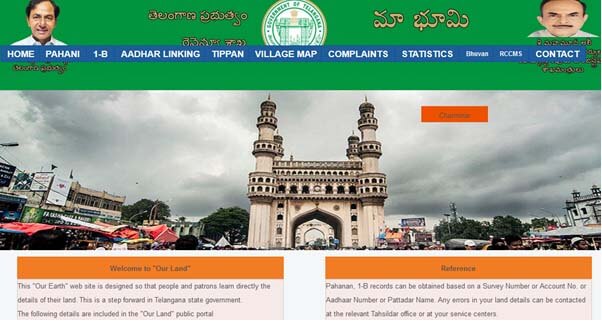 Maa Bhoomi services are provided by the Telegana State Government

A wide list of services are provided by the Telegana State Government to its people through Maa Bhoomi such as:

Name of the owner of the land

Tax and liabilities to be paid by the owner

Survey number and extension of land

Nature of the land and soil

Nature of procession of land

Government/Public rights on the land

The way land is acquired and owned by the owner

Wheras Pahani is issued by Tehsildar, Adangal is maintained by the administrative officer of the village and is written by him every year and it contains various important imformation regarding the land such as survey number of the property, extent, assessment, land classification etc. Apart from the above mentioned information, an Adangal would have following details as well:

Since Adangal is maintained by the Village Administrative Officer, it is his job and duty to fill in details like crops that are raised in the land, trees standing on all government lands, irrespective of whether it falls under tree tax system or not, cases of unauthorised occupation of Government lands, cases of Fasli, Jasthi and Theervai Jasthi etc.

Pahani is classified as District and Village Pahani and to obtain Pahani document, you would need to submit the application form to the Tehsildar of your nearest Mee Seva Centre and the applicable fees for the same is Rs 35. Once Pahani for your land is issued, it gets uploaded on the Maa Bhoomi website from where you can access the same and to access your Pahani, you can visit the Maa Bhoomi website and click on “Your Pahani” option. You need to fill in the Survey or your Aadhar Card number in order to have a look at your Pahani document. You can also take a print out of Pahani document in case you want to. Like District Pahani, you can access Village Pahani also by clicking on “Grama Pahani” and entering the survey number, district, zone and village name on the Maa Bhoomi website. In other words:

Search your Pahani by Survey number or Account Number or Aadhar number. You can choose either of the option as per the information available with you.

Select District name, Zone name and Village name where your property is located.

Select and enter Survey Number and click on submit to generate your Pahani.

Any Questions? Request a callback from our Tax Experts.

Do I Have To Pay Tax On Money Transferred From Overseas To India?

How to Buy Off the Shelf Company and its Benefit?